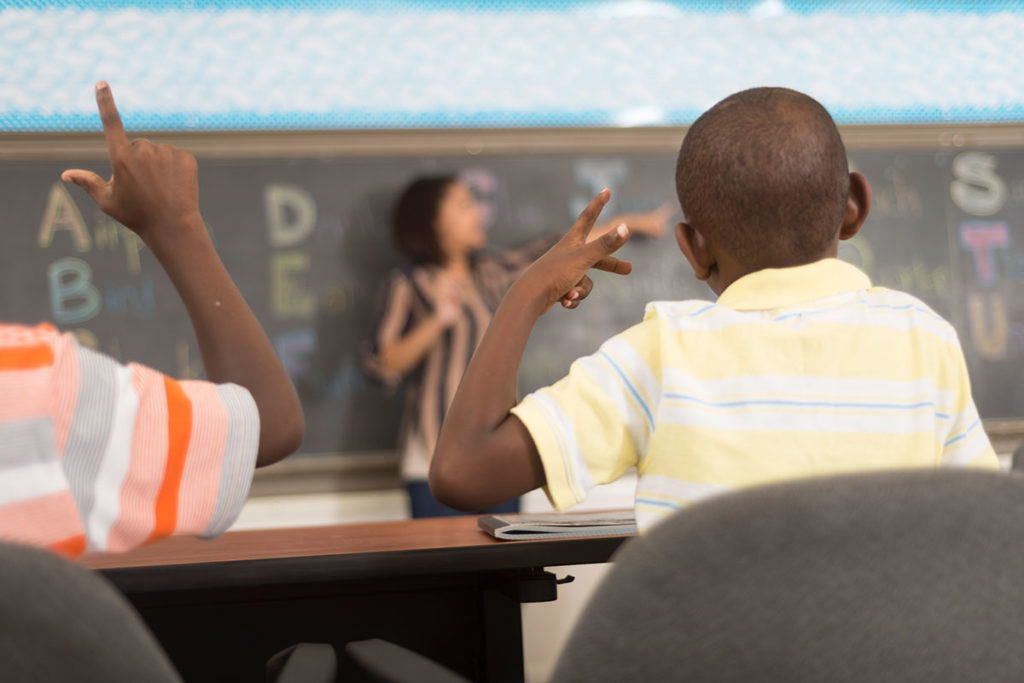 Testimony of Eve L. Hill Before the U.S. Commission on Civil Rights

My name is Eve Hill.  I am a partner with the firm of Brown, Goldstein & Levy.  Until January of this year, I was Deputy Assistant Attorney General at the Civil Rights Division of the U.S. Department of Justice, where I worked on the Division’s disability civil rights, education civil rights, and Title VI implementation.  I’ve been a disability civil rights attorney for about 24 years, having worked in federal government, local government, academia, nonprofit, and private practice.

The Right to Education

Today’s hearing addresses the question of “The School-to Prison Pipeline: The Intersections of Students of Color with Disabilities.”  This is an essential issue we, as a society, urgently have to address.  Equal access to education is the foundation of the American principle that all people are created equal and are entitled to equal opportunities to succeed and contribute to society.  Chief Judge Warren recognized in 1954 that “In these days, it is doubtful that any child may reasonably be expected to succeed in life if he is denied the opportunities of an education.  Such an opportunity, where the state has undertaken to provide it, is a right that must be made available on equal terms.”[1]

Access to education has been a cornerstone of civil rights – and the denial of access to education has been a cornerstone of the denial of civil rights – virtually since the beginning of our republic.  The continuation of slavery was supported by the denial to African-Americans of the right to learn to read and right.  The denial of education became a basis for denying African-Americans the ability to vote, to work, and to hold public office after slavery was officially ended.  And equal access to integrated education was the focal point of landmark civil rights cases such as Brown v. Board of Education.

Civil rights advocates have long challenged systems that sought to deny education to minorities at the front door.  We’ve marched, filed lawsuits, and provided escorts and witnesses to support minority students as they fought to enter the front doors of educational institutions.  But, unfortunately, the courts have not recognized education as a fundamental right under our Constitution.

But access to the front door is not the only barrier to equal education we face today.  The stereotypes and prejudices that led educational systems to block the front door continue to play out once minority students and students with disabilities pass the schoolhouse gate.  And those stereotypes and prejudices are creating a back-door exit through with our children of color and with disabilities are being escorted at alarming rates.  That back-door exit leads almost inevitably to incarceration, which leads directly to unemployment, homelessness, and poverty.

As of 2014, out-of-school suspensions have increased by about 10 percent since 2000 and have more than doubled since the 1970s. All this is despite the fact that incidents of school violence have decreased.[6]  In 2015, the Department of Education’s Office for Civil Rights found that African-American students were three times more likely to be suspended or expelled than white students. African-American and Latinx students make up 40% of public school students, but are over 50% of the students arrested in school or referred to law enforcement.  Students with disabilities are more than twice as likely to receive out-of-school suspensions than nondisabled students and, although they are only 12% of the public school population, they are 25% of the students referred to law enforcement and 25% of those subjected to school-based arrest.[7]

But the back-door exit isn’t as obvious or blatant as the bars at the front door.  It happens one child at a time.  It isn’t written down.  It isn’t announced publicly – in fact, it is denied.  And fighting it often depends on one parent, on their own, fighting for their individual child.

The back-door exit is often just the flip side of the coin of barring the front door.  The police officers who used to bar the front door are now school resource officers who escort children out the back door.  The eligibility criteria that used to keep minority students and students with disabilities from entering are now “zero-tolerance” policies that push them out.  Schools have also adopted “broken windows” approaches to small offenses in order to discourage more serious crimes.  Just as that approach to law enforcement in communities resulted in constitutionally questionable policing, this approach in schools has resulted in stereotypes about students of color and students with disabilities – that they’ll be disruptive or disrespectful, that they’ll make other students uncomfortable, or that they’ll behave differently– becoming bases for removing or arresting children of color and children with disabilities.

School behaviors that used to be a basis for a call to a parent, a trip to the principal’s office, or an after-school detention, are now treated as a reason to call law enforcement and send a child to court.  Schools’ intolerance of different behavior, combined with the criminalization of that behavior, disparately affects both minority students and students with disabilities, and has even greater effects on minority students with disabilities.  Approaching the issue through either a racial lens or a disability lens is not sufficient.  We must use all the tools we have to achieve justice in education and keep our children in school.

The Effects of Exclusion from Education

In an increasingly technology-based economy, access to education is increasingly important to individuals’ quality of life.  Excluding children from education, whether it happens at the front door or through the back door, therefore, has devastating effects on their lives, their communities, and the economy.  For example:

The Effects of Incarceration

The effects of excluding students from school are increased when the students are funneled into a justice system that adds stigma, restricts rights and opportunities, and increases burdens on those students’ lives.  The shift in disciplinary practices and policies from those administered by schools and teachers to those administered by law enforcement further stigmatizes children, restricts their access to employment and housing, and imposes additional burdens on students that follow them throughout their adult lives.

Many applications for employment, public benefits, housing, financial aid, licensing, military service, or admissions to public colleges and universities call for information about past arrests or criminal convictions without distinguishing between adult criminal activity and child arrests or juvenile proceedings.  Some applications even ask if the applicant was ever suspended or expelled from school, has ever been adjudicated, has ever entered a pre-trial diversion program or has ever entered a plea of no contest or nolo contendere.  In addition, juvenile records are subject to varying degrees of protection from public disclosure.

A juvenile delinquency proceeding can also have significant financial and other consequences for a student and their family.  In some states, juveniles and their families may be responsible for paying court costs.  Under “one-strike” rules in public housing a student’s school-based arrest or referral to law enforcement can result in the eviction of the student’s entire family.  And under some state and federal laws, a juvenile conviction can be the basis for an enhanced sentence for a subsequent adult conviction.

Federal laws prohibit discrimination on the bases of both race and disability.[16]  In addition, federal law requires supportive services for students with disabilities and provides some protections from expulsion and suspension.[17]

But minority students are overrepresented among those with disabilities facing exclusionary discipline.  So disability rights advocates must bring racial justice tools to bear in their work as well.

And students with disabilities of all racial and ethnic backgrounds are also overrepresented in exclusionary discipline, despite the protections of the ADA and IDEA.  Some of this problem is likely due to special education teachers not being provided the training and support they need to respond constructively to disruptive disability-related behaviors.  But much of it is also related to lack of understanding and enforcement of the limits the ADA and IDEA place on zero-tolerance policies, school resource officers, and use of law enforcement to respond to disability-related behaviors.  And much of it is disguised by our failures to recognize and respond to the patterns of discrimination occurring in school discipline systems.

In order to see these patterns, the Department of Education Office for Civil Rights’ Civil Rights Data Collection is more important than ever.  And finally, we must be able to use the tools that can effectively address these patterns.  It is difficult to enforce federal law in the face of a zero-tolerance policy that looks neutral on its face but is enforced in a race- or disability-biased way.  Each student exclusion in such a system looks like a neutral application of the no-tolerance rule.  But each non-exclusion is unrecorded.  So there is often no way to show that white students are not being excluded for the same behaviors that minority students with disabilities are being disciplined for.  We must be able to examine the results of disciplinary policies – the disproportion of exclusionary discipline applied to minority and disabled children – and take action to address them.  In short, the disparate impact approach to proving civil rights violations must be protected and enforceable.  Unfortunately, courts have restricted the ability of parents and their attorneys to challenge discrimination using evidence of disparate impact.  Right now – when we need it most to stop the school-to-prison pipeline from ruining the lives of our children – federal enforcement is more important than ever.

[4] Justice Department Sues Georgia for Unnecessarily Segregating Students with Disabilities, https://www.justice.gov/opa/pr/justice-department-sues-georgia-unnecessarily-segregating-students-disabilities (August 23, 2016) (“Approximately 4,600 students with disabilities are currently in GNETS.  In July 2015, the department issued an extensive findings letter, notifying the state that it was violating the ADA by unnecessarily providing mental health and therapeutic educational services to students with behavior-related disabilities in segregated settings, denying them opportunities for meaningful interaction with their peers without disabilities.”)