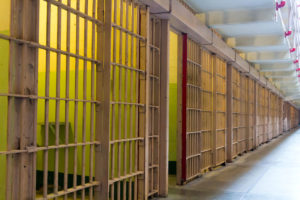 Late last year, when Congress passed a set of modest but long-overdue criminal justice reforms with broad bipartisan support, it was a positive sign that both parties are serious about finally ending our country’s addiction to mass incarceration.

America locks people up at a higher rate than any other country on the planet, with 2.2 million people behind bars. This crisis has devastating human costs and tragic consequences, especially for communities of color and people with disabilities.

These encounters can be deadly. An analysis by the Ruderman Family Foundation found that half of all people killed at the hands of police between 2013 and 2015 had some kind of disability.

So how did we get here?

Over the past half-century, the U.S. has rightly moved away from confining people with disabilities in segregated institutions and mental hospitals. But we have failed to invest in the community-based infrastructure and supports needed to fill the gap.

As a result, more and more people with disabilities have been ensnared in a broken criminal justice system designed to hurt rather than heal – and woefully ill-equipped to meet their needs.

America has effectively replaced one type of harmful institutionalization with another – one that is both even more expensive and even less likely to support recovery.

The over-incarceration of people with disabilities drains scarce resources, inflicts further harm and trauma on an already vulnerable population, and does nothing to make communities safer or healthier.

Fortunately, it doesn’t have to be this way.

The Americans with Disabilities Act (ADA) and settlement agreements stemming from the U.S. Supreme Court ruling in Olmstead v. LC provide a roadmap for police departments, government agencies, and court systems looking to reverse this dangerous and counterproductive trend.

Ruling in favor of two women who had been confined to a state-run mental hospital, the Supreme Court ruled in Olmstead v. LC that the ADA prohibits the unnecessary institutionalization of people with disabilities. Under the precedent set in Olmstead, services for people with disabilities need to be delivered in the least restrictive setting possible. In other words, people cannot be discriminated against, secluded, or locked away on the basis of their disability.

In addition to setting an important legal precedent for people with disabilities, Olmstead also spurred states to deploy creative solutions that have clear applications for our criminal justice system as well.

Settlement agreements in states like Georgia and Delaware have called for a wide range of effective services and interventions – from crisis walk-in centers to stabilization services – to avoid institutionalization and get people the help they need in their communities.

These strategies are proven to help prevent the unjustified segregation of people with disabilities. Why not use them to prevent their unnecessary incarceration as well?

Importantly, these laws and reforms are not merely legal obligations, they are opportunities to improve public health and safety, and save taxpayer dollars in the process.

They also substantially improve people’s lives, allowing them to return to productivity and contribute to their families and communities.

With criminal justice reform gaining momentum across the country, now is the time to get people with disabilities out of cages and into their communities.

Eve Hill and Regina Kline are partners at Brown, Goldstein & Levy and co-leaders of Inclusivity Strategic Consulting, a strategic consulting firm that supports businesses, organizations, and government agencies that want to achieve real inclusion of people with disabilities in their workforces and communities.